Pirates vs Ninja: The End

December 19, 2007
The end for me at least! Pirates went to the printer... last week I believe. It's on to new issues of Sonic X for Archie comics now. I'll update as that issue progresses.

But, looking back on PvN, now that it's finished, I'd like to relate some of my thoughts on the experience.

First of all, I wanted nothing to do with this series when we first started developing the idea. Nothing. Period. Sure, I would toss out the occasional idea here and there, but that was about all. Of course, it was never intended that I work on the book. This was Craig Babiar's book and he was doing a phenomenal job on it. The series was doing well. So well, that they started working on the sequel right away.
I was really happy for Craig. I only know some of what he went through as an artist at AP. He originally started as a penciller on Warrior Nun Areala back in the day. WNA was a big hit back then. As the popularity of the book waned, Craig went from just pencils, to pencil/inks. Then the book went to black and white... The whole time Craig had a family to support and was working part time for the Library. A man of Craig's talent and enthusiasm makes it look easy. It isn't.
As I said, I was happy to see Craig get his hands on a book that's doing well. Just around the time the second series was starting production, Craig called to let us know that he wouldn't be finishing the second PvN. He had been offered a full time position at the Library he works for and would be taking it, making work on a comic impossible. That's where I came in...
Craig said he would be willing to do the first four issues, no more. I was asked to step in as of issue #5. I agreed. I wasn't too thrilled, but I knew the editors didn't really have much of a choice in approaching me. I was fine with this arrangement, as it meant I would still have time for outside projects between the end of Final Girl and starting on issue five of Pirate. That didn't last long. I learned at last year's A-kon that Craig had just finished issue two of Pvn and that he did not wish to do any more issues. Goodbye free time!! ;)
The only good thing that happened going into this series is Fred Perry's involvement. While Fred wasn't able to give much input into the series once he started Sky Sharks, he was able to provide an initial layout for issue three that helped get me into the headspace a little. After that, I was pretty much on my own...
As you can see, there is a marked difference between my work on the book and Craig's. Looking back on it, I see some of my work on the book as very unprofessional. The way in which I depicted the characters, settings, storytelling and action put my disinterest in the material on display for all to see and I should have tried to maintain the standards set down by Craig. There really is no excuse, and I won't try grasping for one now.
With each new issue, however, I tried to get more involved in the process. Helping Robby (the colorist, writer)lay flats or help with backgrounds. By issue six I was doing the backgrounds almost exclusively, and laying most of the flats as well. Sometimes, that was the only way an issue would go in on time. I found I enjoyed working on the backgrounds the most out of any of the work I did in the series. I just really like seeing those environments being realized. Maybe it felt like I was pulling my weight on the book for once. Yeah, I think I was trying to compensate for the horrible pencils I was doing. Oh well. Because of that, I was finally able to get into the spirit of the book at least a little. I'm still no great fan of Pirates or Ninjas, but, just maybe, I was able to inject some of my love for art and comics into the series after all...

Popular posts from this blog

Land of Oz: the Manga 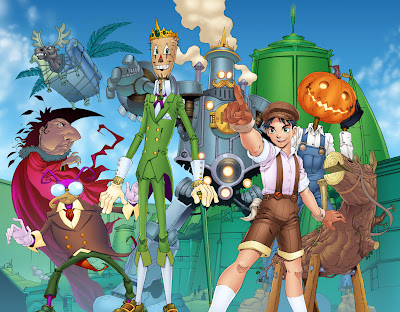 Wow, I've been busy. It doesn't really look like it's going to let up any time soon! Just wanted to drop a quick note about 'Land of Oz.' June 2008! The wheels have been set in motion, so there's no stopping now! Here is a pic of the wraparound cover for the first issue. Let me know what you think!
Read more 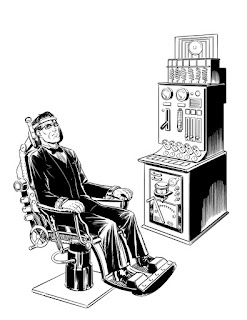 What have I been up to? That's a good question. I'm sure most of the people that see this, already know about my Facebook. So, the things I'm going to post won't be new to you, but I wanna post something here so that I can get back into the habit.


First up: I worked on a very cool comic, Intergalactic Nemesis, for Jason Neulander. Cool retro-scifi comic/stage show.
Read more
April 20, 2012
Man, the ol' blog is dead! I'm gonna have to do something to something to drum up interest!
Read more