Showing posts from 2010
Show all 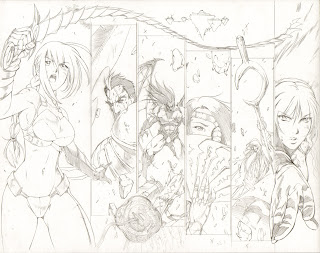 It's coming! What's it been since the last Dragon Arms series? Five, no six years! Whatever, it's been too long. In all that time fan interest hasn't waned very much. I don't think that there's been one convention, outside of Katsucon, where fans haven't asked about Dragon Arms. "When's the next Dragon Arms coming out?", "Any news on Dragon Arms?", "I really enjoyed Dragon Arms, are you going to do another one?" You get the idea. So pre-production has commenced. Yah! Here is some promotional art I'm working on for the series. More to come! Hope you like, let me know what you think!
4 comments
Read more

January 25, 2010
I hate today. Got ahold of a virus somehow, and its a real pain. I doesn't seem to do anything unless I'm on the 'net. Then, I get a pop up every other page... I'm going to have to invest in better antivirus protection. Till then, I'm on a Mac for my internet. More actual updates soon. Almost forgot! I'm working on a Deviantart Club for Antarctic Press. So if you're a fan head on over and check it out. Not much of anything at the moment, but it'll shape up soon!
6 comments
Read more

January 20, 2010
Quick post! Started writing on Governator for March. That's really no time at all in the scheme of things. The hardest part has been finding a storyline I think works. This isn't the same character shown in President Evil, this is more a parody of Arnold and his solution to the problems California is facing. I plan to start posting designs in a few days to show what I have in mind, til then, peace!
3 comments
Read more

How to draw Super Powered Villains

January 18, 2010
Hey, guys! Just finished my articles for Super Powered Villains, and the book is off to the printer! I don't mind saying that I'm very happy with what we've done with this book. Too often, these books are just bologna.I really think we've managed to provide some good analysis for our readers. The why's and hows. What kind of thought process was used. It's unfortunate that we couldn't include as many examples as we wanted, but at 128pgs we cover a lot! Well, on to the next project! We also have another How to book after Villains. How to draw Vampires! One of my favorite subjects. I'm hoping to post more as the book starts to take shape. I want to do a lot of the design this time around if they'll let me.
Post a Comment
Read more
More posts